Earlier we proposed on this site that in space settlements should be kept public property and that private parties will be able to lease land, and raising public revenue. In this article a further in-depth discussion of this policy.

In certain civil law jurisdiction superficies is the right to build on land one does not owns. Of course, this right cannot be created without the consent of the owner, though subsequent landowners cannot be revoked without due cause and compensation of the holder of the superficies.

We will illustrate this with an example. Suppose that Her Majesty owns a plot of land, she can sell the right to build on this plot to Alice. Subsequently Alice can build a house on this plot. Because of the right of superficies, this house is the property of Alice, whilst the land upon it is built remains the property of M.

Since Alice owns her house, she is entitled to sell it to Bob without the consent of M, unless the original agreement between M and Alice contains an explicit clause forbidding this.

One should distinguish between lease and superficies. In most civil law jurisdictions anything which is durable attached to the land, will become property of the landowner. So if Alice would have leased the plot from M, and she subsequently build her house on it, then her house will also become property of M.

When Alice leases a plot of land from Her Majesty, and she let this plot or a part of it to Bob, then we speak of sublease.

Sublease is a difficult issue. One of our reasons to keep land public property is to prevent undesirable speculation. By allowing sublease, landholders can circumvent this. Suppose Alice leases a plot of land from M from 5,000 per year. As long as Alice holds this land, it is not available to Bob. And if there is no other land available to him, at least not a plot that satisfies his desires, Alice could profit from this by offering him to sublease her plot for 6,000 per year. By doing so she makes 1,000 a year.

If many land lessees would sublet their plots of land, it would subvert the whole idea to prevent land speculation. So it would be a logical response to prohibit subleasing all together. But there legitimate reasons to sublease.

Suppose that Alice leases a plot of land where she lives on. Then she goes abroad for a year. She could terminate her lease, but then she need to seek an alternative location to live. And if she continues to maintain her lease, she needs to pay 5,000 for something she does not use. In that case it would be reasonable if Alice would sublet her plot of land to Bob for the period she is absent.

Another example of legitimate sublease: suppose that Alice leases a plot of land from M. On a part of her land, she has a dacha which she only uses occasionally. Therefore she decides to sublet the dacha to Bob for a modest amount of money.

Rather than prohibiting subleasing completely, it would be better to regulate subleasing. We could allow temporary subleasing in case of absence of the principal lessee, provided that the sublease does not exceed the original lease sum. Or we could simply levy a tax on the surplus lease.

When multiple units of land are available for lease, we could use an auction to establish a market conform price. We could do this in two ways: a uniform price auction or a discriminatory price auction.

In the first case all lessees who are assigned will pay the same price per unit land, while in the latter case each lessees will pay a different price. In both cases plots are allocated to those who made the highest bids.

Earlier we did not make a decision for either procedure. After some further consideration, we now prefer a discriminatory price auction to determine lease prices. In case of a uniform price auction the lease price will be determined by the lowest winning bid. Hence many lessees will pay much less than they are willing and able to pay. Consequently the public will miss revenue.

With a discriminatory price auction wealthier lessees will also pay more, than their less wealthier colleagues. This will compensate for not introducing a (personal) income tax in Mordan.

This does not affect our position that lease prices will indexed to inflation. Without such provision long-term leases will decrease in real value.

It should be decided where residences can be build, were recreational and business areas will be located. Specific plans can be more or less detailed, depending on the outcome of the democratic process in a particular habitat. Needles to say is that spatial planning in Mordan will be primarily a responsibility of state governments.

We intend to keep land in space settlement to be public property, which could be leased by private parties. This has an additional benefit for zoning within the framework of a spatial plan. Since people will have to lease land, the state is able to impose conditions in the lease contracts. If a certain area is assigned for private residences, the lease contract will include a clause that the lessee has to use it for this use.

The same applies for people who obtain superficies from the state. Since the land is still owned by the state, the latter could impose conditions to the holder of the superficies.

For the ease of zoning and offering land for lease and superficies, it would be advisable to introduce legal categories of land. Each category has a certain function and associated conditions. For instance woodland could be leased for the production timber and non-timber forest products, but could not be used for building and will always be leased under the allemansrätten condition. Other categories could be residential land, business areas, recreational zone (please, feel free to suggest other categories in the comments).

Once a private lessee has agreed to the conditions of the lease contract, e.g. not building apartment blocks on woodland, the landowner needs to be able ton enforce these conditions. First the authorities need to be able to inspect the leaseholds, of course, without unduly infraction of privacy. Secondly violations should be punished, hence it is advisable to include fines into the contract. These fines will be given to landholders if they after repeated warnings still refuse to comply with the contract. In the most extreme cases (after repeated warnings and fines or severe infractions), the lease contract will be terminated by the state and the lessee will be evicted. 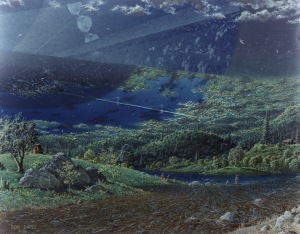 For the establishment of secular, liberal, humanist and republican orbital space settlements

The Four Goals by O’Neill

All content on this site is copyrighted by Mordanicus. No part of this site might be copied without the written permission of the author. This includes the use of web archives.

Other projects by Mordanicus